The Norwegian violist Eivind Ringstad (b. 1994) is a soloist and chamber musician acknowledged for his great musicianship and profound technical mastery. Acclaimed for his expressive richness and emotional intimacy, he performs not only the instruments core repertoire, but takes initiative to create and perform new transcriptions of virtuoso showpieces, and continually commissioning contemporary works for the viola. He made his breakthrough after winning 1. Price in the «Eurovision Young Musicians 2012» in Vienna after performing for an audience with over 40.000 people and broadcasted on television all across Europe.

In the period 2016-2018 Eivind was appointed into the «BBC´s New Generation Artists Scheme», leading to engagements in the UK, including debut recitals in Wigmore Hall and the Edinburgh International Festival. The same time he was awarded the prestigious «Borletti Buitoni fellowship award» and chosen as one of the first participant in «Crescendo», a mentorship program in Scandinavia for young musicians receiving guidance from musicians like Janine Jansen, Noah Bendix-Balgley, Alissa Weilerstein, Jonathan Biss and Leif Ove Andsnes.

Eivind made his debut with the Oslo Philharmonic Orchestra and conductor Eivind Aadland in 2013 and has since been invited by major orchestras and festivals around the world. He has performed with orchestras such as Bergen Philharmonic, Copenhagen Philharmonic, Vienna Radio Orchestra, Lahti and Kuopio Symphony Orchestras, Trondheim, Kristiansand and Stavanger Symphony orchestras, The Norwegian Chamber Orchestra, London Sinfonietta, The Norwegian Radio Orchesta and many of the BBC orchestras. He ha collaborated with renowned conductors such as Miguel Harth-Bedoya, Han-ah Chang, Christian Vasques, Eugene Tzigane, Arvid Engegård, Anja Bilhmaier and Joshua Weilerstein.

Eivind started to play the violin at the age of 5, moving to the viola as his main instrument nine years later. He studied at the Barratt Due Music Institute in Oslo, Norway with Prof. Soon-Mi Chung Barratt-Due. In addition he has received masterclasses from musicians such as Lars Anders Tomter, Maxim Rysanov, Lawrence Power, Nobuko Imai, Hartmut Rhode, Thomas Riebl, Ivry Gitlis and Dora Schwarzberg.

Eivind has been awarded several prices throughout his career including The Norwegian Soloist price, Arve Tellefsen´s Musician Price and the Statoil (Equinor) Price.

He plays the Andrea Guarneri «Conte Vitale» viola dating from 1676, generously on loan from Dextra Musica.

“What I love about music is the feelings it awakens inside of me. Music gives my daily life more meaning. To share this is for me a true blessing.” 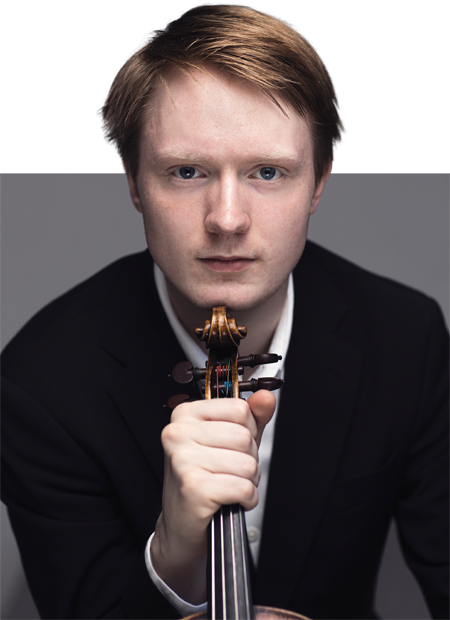